In the film, Carly and Stef draw on their knowledge of traditional ABA (applied behavioural analysis) and IBI (intensive behavioural intervention) therapy as they work with Oskar, but ultimately choose a different therapeutic approach. Reflecting on that experience, Carly writes:

“When it came to helping Oskar we truly felt that ABA or IBI would not help him to thrive and to grow. It would focus on his behaviours only and how to change them, rather than addressing why he’s doing them. He struggles everyday to deal with the overload of sensory information so to also put on him the demands of a program that resembles the average work week of an adult is something we were not prepared to do.

I know this will rub some people the wrong way, but for me a therapy’s goals should not be focused on what I want as a parent, or what society expects of Ted or Oskar. It should allow them to grow, learn and thrive over time and if that happens in a non-linear way that can’t be tracked or entered into an Excel spreadsheet… then it’s probably the therapy for us!”

Encompassing several approaches grounded in learning theory, ABA calls for the therapist and/or parent to instruct a child with autism away from certain behaviors and toward everyday skills, laid out as a series of simplified steps. Through repetition, desirable behaviours are prompted and rewarded. So-called “undesirable” behaviors are closely watched and, if possible, their triggers eliminated. IBI uses the same principles, but children typically participate in 20-40 hours of instruction a week, as opposed to the four hour or less ABA sessions, hence the term “intensive.”

The basic technique was first developed in the 1960s by Ivar Lovaas, a psychologist at UCLA, who successfully launched ABA into the mainstream of autism therapy but whose own practice is now generally disavowed. In his day, punishments for undesirable behaviour included slapping and electric shocks, and adults who received ABA as children have since come forward to be its vocal critics. They question the value of teaching autistic children to perform “normal” behaviours that they may not understand, and the cruelty of suppressing self-regulating behaviors such as stimming. Still, many parents and therapists defend ABA-IBI for its ability to impart valuable life skills and argue that it’s just as effective when practiced with gentle prompting

For a more detailed description of Carly’s decision to steer away from ABA-IBI in favour of other forms of therapy you can visit her blog, The Muddy Path.

A note from Carly & Stef

We invited director Steve Suderman to share our story with the hope that our experience would offer comfort to other families facing similar experiences, and provide insight into life with a special needs child for those who aren’t familiar with the highs and lows of parenting on the spectrum.

This film portrays the beginning of our journey and our story is far from over. We hope that the film demonstrates that there is no single “correct” way to approach the task of supporting your child on their developmental path. We wanted to empower parents to do their own research, and make choices with the intention that they can help their child to thrive, regardless of their diagnosis. We think the film Steve made does this and this website has some additional videos and information for those who want to find out more about topics and therapies featured in the film.

For parents of children with autism the first year after diagnosis can be confusing and tiring. At times you might feel that you can never do enough research, the options are endless, and the developmental milestones can seem unattainable. The important thing to remember is that as parents it is our job to advocate, observe and use our gut instincts!   It's not "one size fits all” and different therapies work for different children. Try therapies that your gut tells you might be a good fit for what you are seeing in your child, and maybe stop anything that doesn’t seem to work since you can always try again later. You know your child better than anyone else and you can trust that instinct.

Lastly, you don’t need to spend a lot of money. There are lots of free things in books or the internet that you can do or try at home. Don’t break the bank – listen to your gut!

For a year director Steve Suderman followed Carly, Stef and their five children, as the family faced each challenge and joy that arose since their son Oskar’s autism diagnosis. Throughout the film Carly and Stef try a range of therapies and treatments; all out of love for their son and the desire to connect with him. The intent of the documentary is not to endorse or dissuade from any particular treatment. Rather, our hope is that the film will communicate the experience of a family touched by autism, something parents can share with family, caregivers, and friends to offer an insight into their world.

We believe that autism is a unique way of being in the world. We advocate for inclusion, respect, and increased services that make tangible differences in the lives of those on the spectrum - and their families. We hope that this collection of articles and videos from our team and other third-party sources will help provide a fuller picture of the treatments, therapies, and ideas explored in the film. 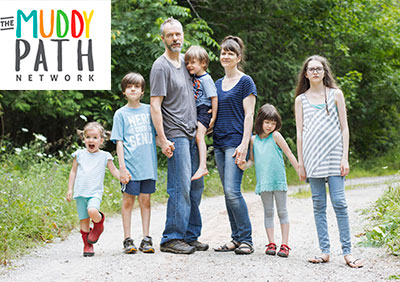 Carly and Stef, the family featured in this film, maintain a blog called The Muddy Path. Please check it out to learn more about their experiences raising a family with children on the autism spectrum.

“Think back to when you were a child. Most of us can’t remember when we were toddlers, but most can remember maybe back to Kindergarten or preschool. What were your days and weekends like?…”

In the process of making this film, we collected a lot of additional material we wanted to share. We hope you find it helpful.

Dr. Temple Grandin explains the benefit of ABA as a method of early intervention, rather than as a treatment which extends later into childhood.

Jackie McMillan, a speaker and educator with autism, explains how many in the autism community, especially those who have experienced ABA/IBI, see this therapy approach as inhumane.

Learn more about the people and ideas featured in the film.