The first time I met Carly and Stef, we were in a crowded cafe. They anxiously showed me videos of 20-month-old Oskar, their son who was showing early signs of being on the autism spectrum. Initially I couldn’t see anything unusual about the videos. It just looked like like parents playing with their toddler. But then they started to point things out: “See how he’s staring at this toy rather than playing with it?” “See how he won’t knock over this pile of blocks like his twin sister?” “See how he won’t look at us?” The videos suddenly became a window into a world I knew nothing about. I was drawn in. 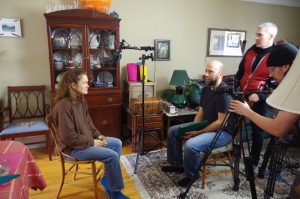 Shooting our interview with Jackie McMillan.

From the beginning, one of Carly and Stef’s main goals was to understand Oskar’s experience of the world: how does he see colours, how does he hear, how does he understand the space around him? When he stimms, what might be the reasons and benefits? I think this was a good place for us to start a journey together because it led us to an important question: Can we separate Oskar from his autism, or is it a fundamental part of who he is? I suspect this question will raise passionate debate. And for some there will be clear-cut answers. But being a parent is a complex thing. And these days (maybe always) one can get lost in a sea of differing and contradictory information on every aspect of parenting. So one of the things I have come to value most in the process of making this film is that Carly and Stef were willing to take me into their complex experience. The only thing more difficult than parenting is parenting a special needs child while a stranger films you day after day after day, and keeps asking you questions that may not have answers. It took a lot of courage on their part.

The other thing I have come to value in making this film is getting to know Oskar, at least a little I hope. I see in Oskar a boy who is joyful and passionate. He likes to figure things out. He likes to explore. He likes music. And like any kid, he is always changing, and he sometimes gets very frustrated. Hans Asperger, one of the first people to study autism, had a critical insight that sometimes gets lost today. He noted that for individuals with autism, one of the most important things we can do is create a supportive environment. One that helps to minimize challenges, and maximize strengths. It’s a simple point that has been echoed by recent writers such as Dr. Barry Prizant and Steve Silberman. And it is a point many in the autism community of been making for a long time. I hope the message is taking hold so that Oskar, and kids like him, have access to the opportunities we all want for our kids. It’s such a simple thing to do, and we can all do our part.

Steve Suderman
Director – Beyond the Spectrum

Learn more about the people and ideas featured in the film.